The impressive mansion that serves as the Turkish Embassy and Ambassador's residence was designed by well known Washington architect George Oakley Totten, Jr., several years prior to its completion in 1914. It was commissioned by Edward H. Everett, a wealthy industrialist from Cleveland, Ohio, who among other things, invented the crimped Coca Cola bottle cap. He was also involved in Texas oil and Missouri beer making.

The site of the house was previously utilized as a city dump, and construction commenced in 1910, lasting four years. With Renaissance styles architectural features on the exterior, the interior aesthetics include a black and white marble entrance hall, gold plated door-knobs, brocaded walls, teakwood floors, a musicians gallery, paneled ballroom, a rococo-styled Otis elevator, and a swimming pool in the basement level. The house was also equipped with several novel conveniences at the time it was constructed, including a Webster air washer and a humidifier.

Everett continued to reside in the mansion until his death in 1929, and his second wife, operatic soprano Grace Burnap, until 1932. At the time, Everett had homes in Washington, Vermont, and Switzerland. Always a social center, the Everetts would entertain several hundred guests with the latest musical geniuses while they were seated in gold painted art nouveau bentwood chairs. Upon the death of Grace Everett, the chairs had allegedly disappeared, only to be rediscovered in the early 1980s in the attic of the mansion.

The house was rented to the Turkish embassy in 1932, and eventually purchased by the Turkish government in 1936. They also purchased all of the mansion's furnishings, eventually adding Turkish rugs, crystal, and a large bronze head of the republic's founder, Mustafa Kemal Ataturk. 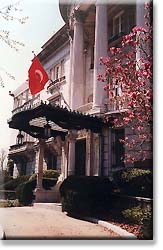