On January 3, 1997, 18 year old Joviane Waltrick was killed in an automobile accident on Connecticut Avenue, approaching Dupont Circle. Her case drew international attention: the accident was attributed to a Georgian diplomat, subsequently charged with drunk driving. While international law would have permitted the diplomat to avoid arrest and prosecution, Georgia permitted the diplomat's diplomatic immunity to be lifted.

Update: on October 8, 1997, the Georgian diplomat pleaded guilty in a court in Washington D.C. to causing the accident that killed Joviane, accepting all responsibility for her tragic death.

For some time after the incident, a banner reading "Justice for Joviane / Justice for the World" hung along the highway railing as a makeshift shrine. Leading up to the banner were flowers and small placards, praising Joviane and decrying her death. She was an immigrant herself, born in Brazil; reads one placard, "Jovi was proud to be in the USA." 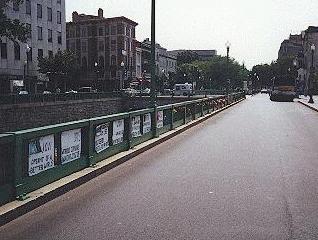 The approach to Dupont Circle where the accident occurred.